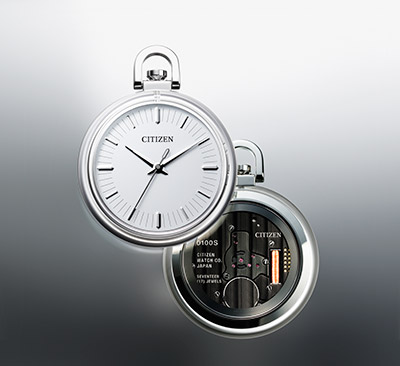 CITIZEN has unveiled the Eco-Drive movement, Cal.0100, a new milestone in time-keeping technology and innovation achieving an unprecedented accuracy of ±1 second in one year, within a 2.92 mm movement that incorporates CITIZEN’s proprietary light-powered technology “Eco-Drive.”
It is showcased in a conceptualized pocket watch designed in tribute to CITIZEN’s first pocket watch released in 1924, and to commemorate the company’s 100-year anniversary in 2018.
Since its foundation in 1918, CITIZEN has continued its pursuit of the essence of timekeeping, always challenging new possibilities, while pushing the boundaries of watchmaking technology as a true manufacture d’horiogerie. The Cal.0100 boasts an accuracy of ±1 second during a span of one year—making it the world’s most accurate Eco-Drive movement to date. It offers precise timekeeping, autonomously and continuously, and reliant solely on the watch’s internal mechanism to deliver precision and reliability.

The achievement mirrors past breakthroughs, including CITIZEN’s 1975 release of the “Citizen Crystron Mega,” which at the time was the first quartz watch with accuracy of ±3 seconds per year. In the following year, CITIZEN invented the world’s first analog quartz watch powered exclusively by light, known as Eco-Drive, and the company’s expertise in watchmaking has continually evolved through its advanced proprietary R&D pipeline, which has led to further advancements in accuracy and longer running time.

About Cal.0100’s Design and Engineering
The Cal.0100 is hand-crafted and encased in sapphire crystal, the shape and design of this conceptual timepiece pays homage to the company’s first pocket watch introduced in 1924, which was the first to bear the “CITIZEN” brand name. The CITIZEN pocket watch was justly named, and epitomized the brand’s mission, which was to provide high-quality timepieces to citizens around the world. While the Cal.0100 will not be available for sale to the public, the accuracy and technology inside the movement will be introduced in future models, set to launch in 2019. 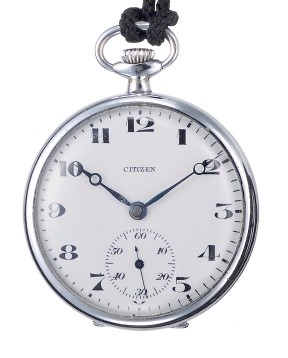 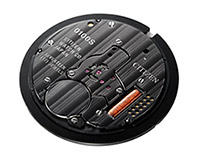 While a traditional tuning-fork-shaped quartz oscillator operates at 32,768 Hz, the AT-cut type quartz oscillator vibrates at a frequency of at 8.4 MHz (8,388,608 Hz), and requires a greater amount of electricity to operate. CITIZEN, as a pioneer of light-powered technology, was successful in creating an Eco-Drive movement incorporating its AT-cut quartz oscillator by applying its own power-saving technologies, which enables the Cal.0100 to run for six months on a full charge—even without the presence of light. To this end, CITIZEN was able to achieve an annual accuracy of ±1 second in an Eco-Drive movement, which establishes a new benchmark in watchmaking for the future.

The black-colored Cal.0100 is visible on the back of the watch through the sapphire glass case. The index hour markers and second hand incorporate a hexagonal design, corresponding to the quartz crystal, which symbolizes ultra-high precision.
CITIZEN’s 100-Year Commitment to Accuracy
All through its 100-year history, CITIZEN has continued its commitment to pursuing accuracy, and has consistently introduced new and cutting-edge technologies along the way as a pioneer in materials science. By optimizing each element and leveraging its accumulated experience and know-how, CITIZEN has developed the Cal.0100, a movement that is able to mark each second in its purest form. CITIZEN’s ongoing commitment to watchmaking tradition and technology has prevailed the test of time, and the company is thrilled looking ahead to the next 100 years of innovation for Citizen Watch Group.

*1. Eco-Drive is CITIZEN’ s proprietary technology that powers watches using any natural or artificial light source, eliminating the need to replace batteries. Certified as an Eco Mark product for the first time in the watch industry.

CITIZEN WATCH, marking its 100th anniversary in 2018, is a true manufacture d'horlogerie with a comprehensive manufacturing process that extends from creating a watch’s individual components to its final assembly. The company operates in more than 130 countries around the world. Since its founding in 1918, CITIZEN have held the belief of “Better Starts Now” — that is, no matter who you are and what you do, it is always possible to make something better, and now is the time to start doing it. Sharing this belief, we have made watches, invented and improved technologies and explored the future of watches such as our propriety light-powered Eco-Drive technologyand state-of-the-art satellite-synchronised timekeeping

*The final design and specifications are subject to change without notice.
*Eco-Drive is registered trademarks or trademarks of Citizen Watch Co., Ltd.